In all cultures, the family imprints its own identity on its members.
The human experience of identity has two elements: a sense of belonging and a sense of separation.
The laboratory in which these ingredients are mixed and dispensed is the family, the matrix of identity.
Salvador Minuchin

Family psychotherapy originated in the American cultural context of the 1950s, and developed in two different directions, a systemic one of the Palo Alto School (Bateson, Watzlawick and Jackson), and a more psychodynamic, which today we would call relational, oriented to the trigenerational study of the family, with the contribution of pioneers such as Ackerman, Boszormenyi-Nagy, Framo, Bowen, Whitaker.

The structural approach of Salvador Minuchin is placed in an intermediate position, which will have a significant development in the following years.

The pioneers of family therapy

Nathan W. Ackerman (1908-1971) Born in southern Russia into a wealthy family of Jewish merchants, in 1912 he emigrated to the USA. After practicing child psychoanalysis for many years, in 1937 he published a first article on family therapy, a discipline that he embraced for his life.

Murray Bowen (1913-1990) Coming from a large family that has a funeral home in a remote village in Tennessee, he acquired a decidedly psychodynamic training at the Karl Menninger Institute. He invents the Family System Theory, with the fundamental concept of the Differentiation of the Self from the family of origin.

James Framo (1916-2001) Third of five in a family of Italian origin who emigrated to Philadelphia, he developed an original model of intergenerational couple therapy. He collaborated for many years with Ivan Boszormenyi-Nagy, with whom he founded the Eastern Pennsylvania Psychiatric Institute.

Jay Haley (1923-2007) After obtaining a master's degree in Fine Arts, he became a researcher at the Mental Research Institute in Palo Alto, later following Milton Erickson's work on hypnosis. He finally developed the strategic approach at the Child Guidance Clinic in Philadelphia.

Salvador Minuchin (1923-2017) Born in Argentina in a family of Russian Jewish immigrants, he draws from his childhood experiences the sense of family structure as a seat of organization, interdependence and rules to safeguard both the functioning of the family system as a whole, and the margins of freedom of each component. The structural model and family therapy with children are his most original contributions.

Mara Selvini Palazzoli (1916-1999) Born in Milan into a family with a turbulent pace of life, she managed to survive psychologically the stresses of childhood and the difficult relationship with her parents thanks to her resilience, a positive factor, with which, she can not only overcome, but make productive events and conditions of life otherwise negative. She has predominantly cynical imprint. Her works on psychosis and eating disorders remain fundamental.

Virginia Satir (1916-1988) Born in Wisconsin from a humble family of German origin, in therapy she shows exceptional empathic characteristics. She develops a humanistic-integrated approach. Her most original contribution is her use of family sculpting.

Carl Whitacker (1912-1995) grew up in New York State on an isolated farm, he graduated in medicine school and specialized in gynecology, later pursuing psychiatry, becoming the leader of symbolic-experiential therapy. An authoritative but isolated character, for him therapy is an extension of his way of being.

The beginning of family therapy in Italy

Mara Selvini Palazzoli imports and elaborates the systemic theories of Palo Alto and in 1968 founded the School of Milan. In the same period Luigi Cancrini founded the first group more closely linked to the strategic-structural ideas of Haley and Minuchin. 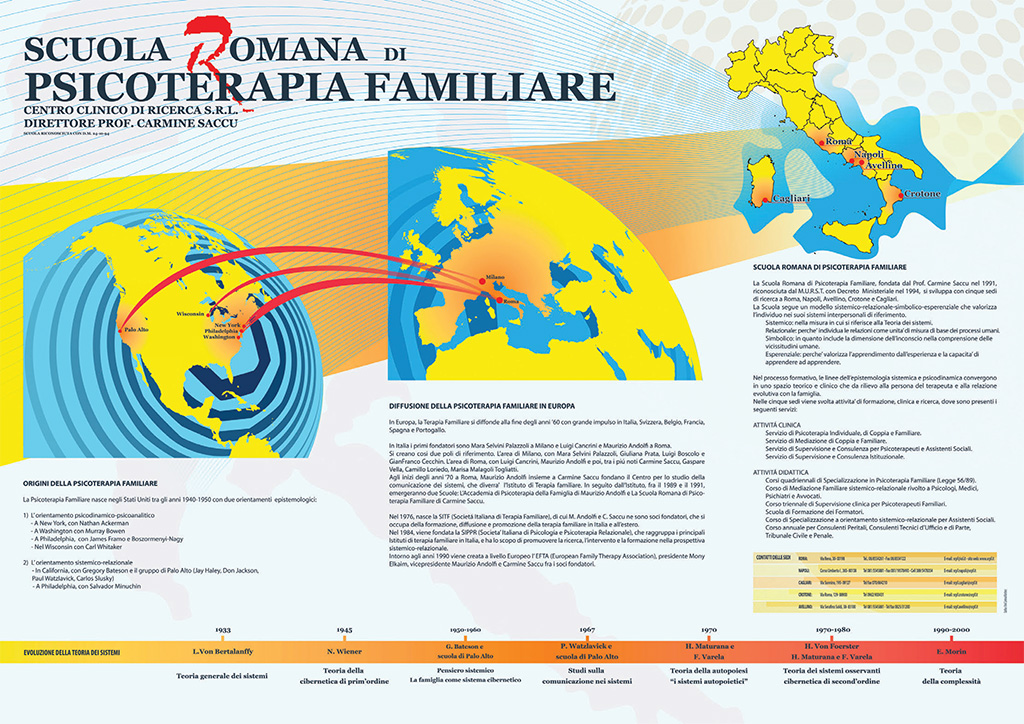